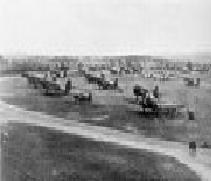 Exeter International Airport (IATA: EXT, ICAO: EGTE) is an airport close to the city of Exeter in the county of Devon, England.

The airfield had originated as a grass field for club flying before being constructed in 1937 and formerly opened on 30 July 1938 as Exeter Airport at a cost of about ?20,000.

In 1942, the 08-26 runway was extended in length to 6,000 ft in a general upgrading. In the early years, the airfield had gained 19 small, fighter-type pan hardstandings and 14 double pens. Nine concrete loops were added on the northern side of the air-field early in 1944. Hangars, gathered over the years, were one Hinaida, six Over Blisters and four Extra Over Blisters.

During World War II RAF Exeter was important RAF Fighter Command airfield during the Battle of Britain, with some two dozen different RAF fighter squadrons being stationed there for varying periods through 1944, and just about all the operational fighter types of those years had been present.

RAF Exeter was also used by the United States Army Air Force (USAAF) Ninth Air Force as a D-Day troop transport base with Douglas C-47 Skytrain transports dropping paratroops near Carentan to land on the Normandy Beachhead. It was also known as USAAF Station 463.

No 213 Squadron from 18 June 1940
No 87 Squadron from 5 July 1940
No 601 Squadron from 7 September 1940
Despite extensive efforts at camouflage, including painting the runways, Exeter attracted the Luftwaffe on a number of occasions during the early years of the conflict and a few of the administrative and technical buildings were destroyed.

USAAF use
Exeter met the requirement of basing USAAF troop carrier groups close to where units of the 101st Airborne Division were located and within reasonable range of the expected area of operations.

5 June 1944 photograph of C-47s of the 95th and 98th Troop Carrier Squadrons at RAF Exeter with freshly applied black/white invasion stripes to aid in aircraft identification from the ground. There was insufficient space to park all the aircraft on the concrete, so many were parked on grass turf.The 440th Troop Carrier Group arrived on 15 April 1944 with over 70 C-47/C-53 Skytrain aircraft. There was insufficient hardstandings to accommodate all the aircraft so many had to be parked on the turf, some areas being supported by tarmac.

The group dropped paratroops near Carentan in the early hours of 6 June and the following day delivered parapacks containing fuel and ammunition to the same area. Accurate flak accounted for three C-47s on D-Day and a further three were lost on the resupply mission, one of the latter in a freak accident when struck by bombs accidentally released from a P-47 Thunderbolt.

As soon as satisfactory landing grounds were available in the Normandy beachhead, the 440th shuttled C-47s to and from France, often evacuating wounded.

As with the other groups of the 50th Troop Carrier Wing, the 440th sent three squadrons, the 95th, 96th, and 97th TCSs. to Italy on 17/18 July, where they operated from Ombronc airfield hauling supplies to Rome before taking part in the airborne invasion of southern France, Operation "Dragoon", on 18 August. The 98th TCS returned to Exeter on 23 August 1944 and the following day the other squadrons returned from the Mediterranean.

The 98th TCS remained at Exeter until 7 August when it began operating from RAF Ramsbury. Three days later it dropped parapacks to a US infantry battalion that had become encircled at Marlain when the German Army attempted to launch a counter-offensive.

On 11 September the headquarters of the 440th TCG was established at the group’s new base al Reims, France (ALG A-62D), and the last of the air echelon left Exeter two days later. Nevertheless. the airfield was still used by the USAAF Ninth Air Force for the air evacuation of wounded and a station complement squadron remained until November.

Postwar use
Walruses of an RAF air-sea rescue flight were the next tenants and these were joined by a glider training unit early in 1945.

Post-war, Exeter was reclaimed by Fighter Command and a French Supermarine Spitfire squadron, No. 329, which came and stayed until November 1945. Meteors and Mosquitos made a brief appearance the following spring.

No. 691 Squadron’s target-towing Vultee A-31 Vengeances, which had been present for more than a year, proved to be the last RAF flying unit of the Second World War period based at Exeter.

When No. 691 Squadron departed in the summer of 1946, the station was made available for civil use, being officially transferred to the Ministry of Civil Aviation on 1 January 1947 although there was still some reserve RAF activity until the 1950s.

Scheduled services to the Channel Islands began in 1952 and charter flights to various locations followed. A new terminal building was opened in the early 1980s and various other improvements, including a runway extension, were carried out over following years to establish Exeter as an important airport in the West Country.