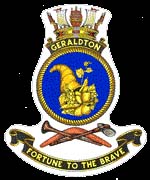 Two Australina navel ships have bore the name Geraldton, The first from 1941, was a Bathurst class corvette built by Poole & Steele, New South Wales.
She was deployed to the British Eastern Fleet and served in the Indian Ocean.
Later deployed to the Mediterranean she was involved in the Allied invaision of Sicily.
Afterwards reassigned to the British Pacific Fleet until ship was sold in 1946 to the Turkish Navy. She was renamed Antalya.

The second vessel was a Fremantle Patrol Boat.
Built by North Queeensland Engineers and Agents at Cairns, Queensland in 1982. She was decommissioned in 2006.