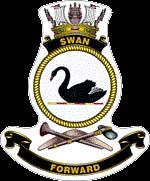 There have been three HMAS Swan’s.
The first a River class destroyer ( 1915 - 1930 ).
The second a Grimsby class Sloop commissioned in 1937, serving  as an escort and patrol vessel during the Second World War. Swan was damaged in the first air raid on Darwin in 1942.
The surrender of the Japanese forces in New Ireland was signed on board the Swan 1945.
She was paid of to reserve in 1950 and converted to a training vessel in 1956.
She was paid off for disposal in 1962 and sold ofr scrap in 1964.
The third HMAS Swan was a River class Frigate, commissioned in 1970.
1974 she was awarded the Duke of Gloucester Cup for being the most efficient ship in the RAN.
1981 became the first Australian warship to visit China in thirty two years. Also became the first Australian warship to exercise with the Japanese Maritime Self Defence Force.
Paid off in 1996, she was scuttled as a diving wreck in Western Australia.