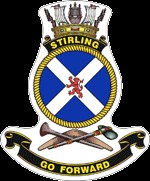 HMAS Stirling is the administrative centre of the Royal Australian Navy’s main naval base on the west coast (Fleet Base West), located on Garden Island just off the Western Australian coast near the city of Perth.  Complement: 2300.

The name HMAS Stirling honours Admiral Sir James Stirling , Royal Navy (28 January 1791–23 April 1865), a British marine officer and colonial administrator who landed on Garden Island, Western Australia in 1827 and returned as commander of the barque Parmelia in June, 1829 to establish and administer the Swan River Colony in Western Australia. He was the first Governor of Western Australia (1828–38) and on his own initiative signed Britain’s first limited treaty with Japan in 1854.

The planning of Stirling began in 1969 when, after it was decided to create the Two Ocean Policy, a feasibility study into the use of Garden Island as a naval base was begun. The 4.2 kilometre causeway linking the island with the mainland was completed in June 1973. Construction of the wharves and workshops began in early 1973 and accommodation in 1975 with the facility, including the new Fleet Base West, being formally commissioned on July 28, 1978.

The first major unit to call Fleet Base West home was HMAS Stuart (F 21/DE 48), having first been assigned to Stirling in 1984 for several years and, after refitting in the east, again in 1988 until decommissioning in 1991.

Stirling has expanded enormously within its existing boundaries and has seen building such as the Submarine Escape Training Facility – one of only six in the world and the only one in the Southern Hemisphere. Stirling is home to all 6 of the Collins class submarines operated by the Royal Australian Navy Submarine Service.