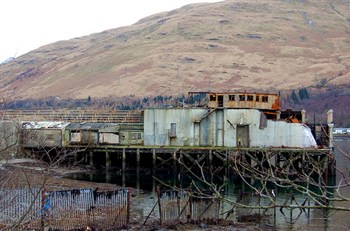 The RN Torpedo Range opened officially in April 1912, under the control of Chief Gunner (T) D J O’Meara, MBE RN, to support the manufacture and testing of torpedoes produced by the first RN Torpedo Factory, which opened in Greenock in 1910. Previous torpedoes within the Royal Navy Department were manufactured only at the Royal Navy Gun Factory, Woolwich, and ranged at Bincleaves near Weymouth. During the first 40 years, 18” Mk17 and 21” torpedoes of various Mks and designs were tested locally. The first 21”Mk8 was fired as an experimental weapon as long ago as 1934 and virtually the same torpedo is still in use today. The last 18” Mk17 torpedo was fired in 1955.