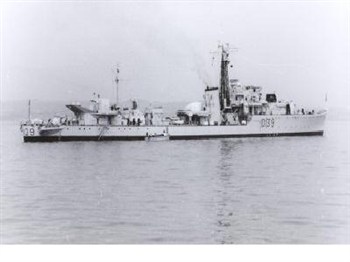 My Father served onboard HMS Obdurate in the Convoys to Murmansk. He also served onboard HMS Scorpion. He served in the Convoy where the Battleship York takes claim for sinking the German Battleship (Which I cannot remember the name of).
He was a Gunner by the name of Peter Selwyn Richardson. Peter was from Abercynon, Glamorgan and believed to have enlisted under conscription letter in 1941.
Peter served onboard HMS Scorpion, HMS Obdurate and a Submarine for one tour after which he requested and got a transfer back to above water craft. Peter survived two ships sinking under him and rescued twice.
We have in our possession a few photos and would like to pass on copies of these.
We know that Peter was awarded at least 3 medals, one in the shape of a star, however in 1964 these were given to my elder brother and his son lost them whilst playing in a field. Therefore we have no knowledge of his War Service number nor details of his service. Peter Selwyn Richardson was born in 1914 and died in 1969.