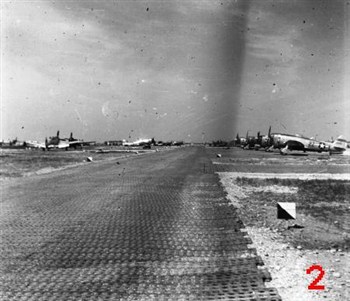 The Air Defence Research and Development Establishment was built at the northeastern end of the airfield, and in May 1940 the RAF Special Duties Flight, operating a very mixed bag of aircraft arrived to take part in the experiments with Radar. The SDF operated such diverse types as the Bristol Blenheim, Avro 504K, Scott Viking gliders, and eventually, 3 Hawker Hurricanes, for defence. In addition, the Royal Navy Fleet Air Arm sent aircraft for Radar trials from HMS Raven at Eastleigh, though these were only transient visitors.

USAAF Use
In 1943, the USAAF Ninth Air Force required several temporary advanced landing grounds along the southern English Channel coast prior to the Normandy invasion to provide tactical air support for the ground forces landing in France. Christchurch was provided to support this mission. A single steel wire and plank Marsden Matting runway and parking apron was laid down for the heavier American fighters. The runway was aligned 245/065 and was dimensioned1650 x 50 yards (46 m). In addition, the airfield retained its existing grass runways N/S 1,000 yd (910 m), NE/SW 1,000 yd (910 m), E/W 1,000 yd (910 m), NW/SE 950 yd (870 m).

509th Fighter Squadron (G9)
510th Fighter Squadron (2Z)
511th Fighter Squadron (K4)
The 406th was a group of Ninth Air Force’s 84th Fighter Wing, IX Tactical Air Command. It flew the Republic P-47 Thunderbolt. The group engaged chiefly in bombing airdromes, marshalling yards and bridges in France in preparation for the invasion of France. It flew patrols in the vicinity of Brest during the D-Day invasion and then flew armed reconnaissance missions to support operations in Normandy.

The 405th moved to its Advanced Landing Ground at Picauville, France (ALG A-8) on 22 June 1944, ending the USAAF’s use of Christchurch.

Ongoing Operations
From the Continent, the 405th engaged primarily in providing support for ground forces until May 1945. Bombed enemy vehicles and gun positions at St Lo in July 1944; attacked barges, troops, roads, and warehouses during the Battle of the Bulge, Dec 1944-Jan 1945; and struck airfields and marshalling yards when the Allies crossed the Rhine in March 1945.

The 405th Fighter Group flew its last mission on 8 May 1945 from Straubing, Germany and returned to the United States during July 1945. It was inactivated on 29 October.

The 405th Fighter Group received a Distinguished Unit Citation for a mission in France on 24 September 1944. Answering a request from Third Army for support near Laneuveville-en-Saulnois, two squadrons, flying on instruments through rain and dense overcast, were directed by ground control toward a furious tank battle where, in spite of severe ground fire, one squadron repeatedly bombed and strafed enemy tanks. The second squadron, unable to find this target because of the weather, attacked a convoy of trucks and armored vehicles. Later the same day, the third squadron hit warehouses and other buildings and silenced ground opposition in the area.

In addition, for operations, June-September 1944, that aided the drive across Normandy and the liberation of Belgium, the group was cited by the Belgian government.

In January 1946 control of the airfield passed to the Ministry of Aircraft Production.