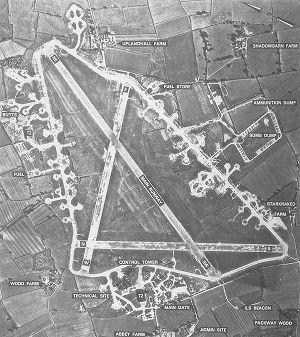 RAF Bungay (also known as Flixton) is a former World War II airfield in England. The field is located 6 miles SW of Beccles in Suffolk on the south bank of the Waveney River close to the B1062 Harleston to Bungay road.

The airfield is also known as Flixton after the village near which it was built.
The airfield was turned over to the United States Army Air Force Eighth Air Force and designated Station 125.

428th Bomb Squadron
Bungay was still unfinished when the 428th Bomb Squadron, assigned to the 310th Bombbardment Group (Medium) at RAF Hardwick arrived with fourteen B-25 Mitchell medium bombers in October 1942. The squadron moved on to Mediouna, French Morocco on 18 November.

329th Bomb Squadron
In December 1942, eight B-24 Liberators the 329th Bomb Squadron of the 93d Bombardment Group (Heavy) at RAF Hardwick were sent to Bungay to prepare for special intruder operations. These aircraft conducted raids in bad weather with the mission of harassing the German air raid warning system. The 329th flew these missions until March 1943 when they rejoined the 93d at Hardwick.

Besides strategic missions, the group often carried out support and interdictory operations. It supported the Normandy invasion in June 1944 by attacking strong points, bridges, airfields, transportation, and other targets in France. Aided ground forces at Caen and St Lo during July by hitting bridges, gun batteries, and enemy troops. Dropped supplies to Allied troops near Nijmegen during the airborne attack on Holland in September. Bombed marshalling yards, bridges, and road junctions during the Battle of the Bulge, December 1944 - January 1945. Dropped supplies to airborne and ground troops near Wesel during the Allied assault across the Rhine in March 1945.

The 446th Bomb Group flew its last combat mission on 25 April, attacking a bridge near Salzburg. It returned to Sioux Falls AAF South Dakota during June and July 1945, being deactivated there on 18 August 1945.

Royal Navy/Royal Air Force use
After the war, the field was turned over to the Royal Navy and the station became HMS Europa, being the satellite of HMS Sparrowhawk (RNAS Hatston) where 3 Fleet Air Arm squadrons were based.

In 1946 it was returned to RAF control and was assigned to No. 53 Maintenance Unit and became a maintenance sub-unit of 94 MU which had its HQ at RAF Great Ashfield. Stored on the runways and in the buildings, were 250 lb., 500 lb., 2000 lb., and 4000 lb. bombs, balloon cable cutting cartridges, depth charges, 7" parachute flares and German ammunition. The latter two items were eventually taken to 53 MU at RAF Pulham, and destroyed there. Some time in July 1949, the site was taken over by 53 MU until Bungay’s closure in 1955. The airfield was eventually put up for sale and disposed of in 1961/1962.