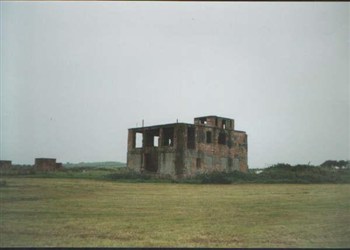 When the Second World War broke out, Ballyhalbert was one of around 25 sites in Northern Ireland chosen to be an RAF Airfield.

Construction began in 1940 and the Windmill Stump at Clydesburn was demolished during the process.  The airfield was officially opened on 28th June 1941.

Over the years Ballyhalbert saw service from RAF, WAAF and Royal Navy personnel.  Servicemen from Australia, New Zealand, Canada, Amercia and Poland also saw duty at Ballyhalbert.  A short distance away from Ballyhalbert Airfield in two local Churchyards lie Canadian, Australian and Polish men who died whilst serving at Ballyhalbert.

One important event that happened during the lifetime of the airfield was on 19th May 1944 when General Eisenhower, Supreme Commander Allied Forces visited the station en route for RAF Bovington.  General Eisenhower later went on to become President of America in 1953.

Today the airfield site is used as a caravan park although in the last few years new owners have took over the park and have put forward various plans for developing the site.  One of these plans is the building of park homes.  If all the plans proceed this will eventually end up with all remains of the airfield being removed to accomodate this housing development.

Thanks to:
Ballyhalbert Historical Society