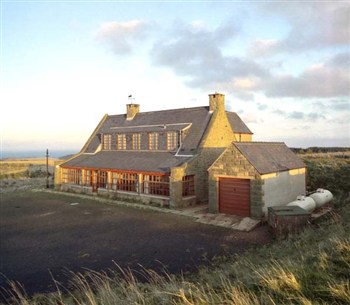 
Crosslaw was a Chain Home Extra Low (CHEL) site built in 1952 to replace the Chain Home station at Drone Hill. It is an R2 single level operations room serving a single Type 14 radar system. The guardhouse/bungalow still survives in excellent condition at the end of a long drive a quarter of a mile south west of an un-named dead end road to Lumsdaine. The bungalow, built of local stone, has been fully restored with a circular addition at the rear housing a staircase. It is now a private home. The stairway down into the bunker has been incorporated into the house as a den but has been blocked a few yards down the sloping tunnel into the bunker. The bunker which, when last inspected in the late 1990s was found to be wet.

Apart from the guardhouse/bungalow nothing else survives above ground.