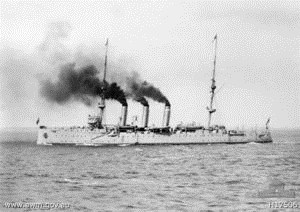 On 12 August 1914 she intercepted and captured the steamer Zambezi, an ex-British vessel under German control, which became the RAN’s first wartime prize. A month later Encounter accompanied the successful Australian operation to capture German New Guinea, escorting the transport and store ships and providing covering fire during the advance of the Australian Naval and Military Expeditionary force from Herbertshohe to Toma. These shots are generally regarded as the Navy’s first offensive fire of the war. Encounter later took part in the search for the missing submarine AE1.

HMAS Encounter paid off on 30 September 1920, was renamed Penguin on 1 January 1923, and served as an accommodation ship until scuttled on 14 September 1932 off Sydney. She now lies at a depth of around 74 meters and is dived regularly.