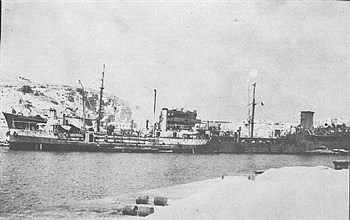 1921/48 stationed as Port Oiler at Malta and escaped the war there without any major damage. She was normally kept empty and only took on fuel, from underground tanks, during fuelling operations
1948 sold to Oscar Shipping Co London, Greek interest, and renamed Portnall
1951 Reacquired by the Admiralty for the Korean War, renamed Boxol and stationed at Gibraltar.