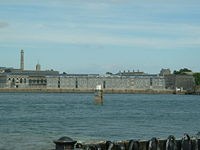 The Royal William Victualling Yard, in Stonehouse, a suburb of Plymouth, England, was the major victualling depot of the Royal Navy and an important adjunct of Devonport Dockyard. It was designed by the architect Sir John Rennie and was named for King William IV. It was built between 1826 and 1835, and occupies a site of approximately 16 acres. The Yard was closed in 1992 and subsequently passed into private hands. Grade 1 listed, it is now undergoing on-going conversion to an up-market mixed use development.