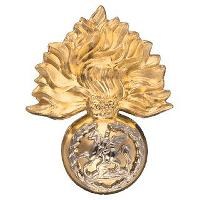 ORIGINS
The Fusiliers take their title from the time of King James II in 1685 when he ordered Lord Dartmouth to form an Ordnance Regiment to guard the artillery. He called them my Royal Regiment of Fuzileers and had them armed with the Fusil, the most up to date weapon of the day. The Regiment became the 7th of Foot, the Royal Fusiliers (City of London Regiment) and other infantry regiments subsequently became Fusiliers, the most famous of which, the royal Northumberland (5th of Foot), Lancashire (XX of Foot) and in the 1960s the Royal Warwickshire (6th of Foot) together with the Royal Fusiliers formed the Royal Regiment of Fusilier in 1968 (Englands Finest)

The Royal Regiment of Fusiliers inherited a unique history and set of traditions from its four former regiments.

Each former regiment has an exceptional place in military history, from the Northumberland Fusiliers winning of the Hackle at the battle of St Lucia, to the Lancashire Fusiliers winning 6 Victoria Crosses at Gallipoli. The Royal Warwickshires led the way on D-Day while the Royal Fusiliers counter attack at Albuhera in 1813 undoubtedly saved Wellingtons campaign in Spain against Napoleon.

All four regiments fought in WW1, raised 196 battalions between them and were represented in every major campaign.  In WWII all four regiments took part in some of the most incredible operations of that period, from the Lancashire Fusiliers operating as Chindits against the Japanese in Burma to the Royal Warwickshires D-Day landing and the Royal Northumberland and Royal Fusiliers fighting in North Africa and Italy.

After WWII the Royal Northumberland Fusiliers and Royal Fusiliers fought in Korea and all four regiments saw service in one of the many trouble spots around the world from Malaya to Kenya.

Since 1968 and the Regiments formation, Fusiliers have seen service across the world and found themselves at the sharp end in countries as diverse as Northern Ireland and Cyprus, More recently the Regiment served in the Balkans and took part in the first and second Gulf wars.

Today, Fusiliers both Regular and TA have served from Iraq to Afghanistan and are ready for deployment anytime, anywhere.

The Royal Regiment of Fusiliers was formed on April 23rd 1968, as part of the reforms of the army that saw the creation of the first ’large infantry regiment’, With the  amalgamation of the four English fusilier regiments these were,

We also have a number of Fusilier companies in Birmingham, London and in Bury, Lancashire.

The distinctive red and white Hackle, worn by all ranks in the Regiment, was handed down from the Royal Northumberland Fusiliers. The Hackle was awarded in recognition for the defeat of the French at the Battle of St Lucia in 1778. The white hackles were removed from the French dead by the Fusiliers. In 1829 King William IV ordered the white plume to be worn by all line infantry regiments, and in order not to take away from the Fifth (Northumberland) Regiment of Foot’s battle honour, their plume was distinguished with a red tip making the plume red over white.

THE REGIMENTAL AND TRADITIONAL DAYS

Apart from the Regimental Day the days shown below are often observed since they were traditional days of the former Regiments.