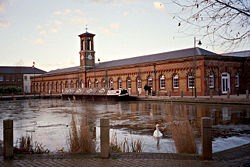 The Royal Small Arms Factory (RSAF) was a UK government-owned rifle factory in Enfield, now part of north London, which produced British military rifles, muskets and swords from 1816. It closed in 1988, but some of its work was transferred to other sites.
The factory was located at Enfield Lock on a marshy island bordered by the River Lea and the River Lee Navigation. It was built on the instructions of the Board of Ordnance near the end of the Napoleonic War. The land was acquired in 1812 and the factory completed by 1816. The site had the advantages of water-power to drive the machinery and the River Lee Navigation for the transportation of raw materials and finished weapons. The RSAF was originally all situated on the east side of the Lea, in the county of Essex in Waltham Abbey parish, Sewardstone hamlet. The course of the river was diverted during the life of the factory, and part of the site then fell in Enfield parish. Local boundary changes initiated by SI 1993/1141 after it closed transferred the site entirely from Epping Forest (district) to the London Borough of Enfield.

The original ambitious plans by Captain John By included three mills. Later, the engineer John Rennie recommended the construction of a navigable leat. The leat was made, although only one mill with two waterwheels was completed.

In 1816 the barrel branch was transferred from Lewisham; and by 1818 the lock and finishing branches had been moved to the site, enabling the closure of the Lewisham factory. A sword-making department was set up in 1823