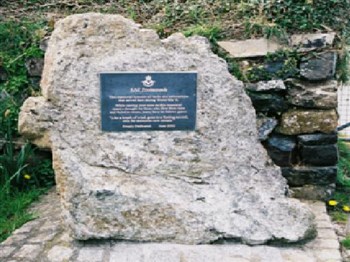 Predannack Airfield is situated near Mullion on Cornwall’s Lizard Peninsula. The runways are operated by the Royal Navy and today it is used as a satellite airfield and relief landing ground for nearby RNAS Culdrose.

It is also home to an RAF Gliding School unit and the Royal Naval School of Fire Fighting, which holds a number of dummy aircraft for fire extinguishing practice, together with a number of retired airframes for personnel rescue practice, such as this disused Westland Wessex (right).

Building work began for an RAF advanced night fighter base to protect the nearby ports of Falmouth and Penzance during 1940 and RAF Predannack Down opened in 1941 as part of Portreath Sector. It later transferred to RAF Coastal Command until it went into care and maintenance on 1 Jun 1946. During the Second World War Coastal Command squadrons flew anti-submarine sorties into the Bay of Biscay as well as convoy support in the western English Channel using aircraft such as Beaufighters and De Havilland Mosquitoes.

After a short period of experimental use by Vickers under the supervision of Barnes Wallis around 1951, the base was taken over by the Royal Navy on 15 Dec 1958.

The airfield was allocated the ICAO code EGDO but this fell out of use as it became a satellite airfield for nearby RNAS Culdrose, to handle intensive helicopter operations and as a relief landing ground. There is also a small arms range on the site and the RN Fire Fighting School moved here in 1971.

Situated on the western side of the spectacular Lizard Peninsula, parts of the base away from the operational areas are within a Site of Special Scientific Interest for its combination of botanical (orchids), zoological (butterflies & snakes) and geological (bastite & serpentinite) uniqueness.

A plaque at the entrance, commemorating those who served at RAF Predannack Down during World War II was unveiled on 11 June 2002. It reads: "Like a breath of wind gone in a fleeting second only the memories now remain."