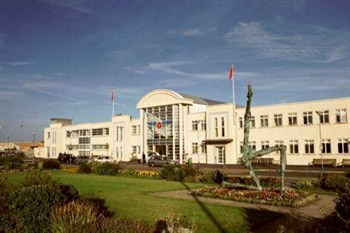 The airfield came under Royal Air Force control at the outbreak of World War II. Known as RAF Ronaldsway, it was one of the few airfields that continued operating civilian flights throughout the wartime period.

The airfield was used by № 1 GDGS (Ground Defence and Gunnery School) operating Westland Wallace aircraft, the drogues from these aircraft being fired on from gun emplacements on Fort Island and Santon Head.

RAF operations continued until 1943 when the airfield was handed over to the Admiralty for further development as a Fleet Air Arm training station.

Now a naval air station, RNAS Ronaldsway, the airport was taken out of commission in 1943 for almost twelve months of extensive development. By the summer of 1944 the airfield had evolved from a grass landing area with a few hangars to a four runway airfield with the infrastructure to house and operate three training squadrons using Fairey Barracuda torpedo bombers.

Renamed HMS Urley (Manx for Eagle) by the Admiralty operations recommenced in the summer of 1944, the airfield’s main role being that of a torpedo working-up station. № 1 OTU consisted of №s 710, 713 and 747 Squadrons, Fleet Air Arm and these operated until the cessation of hostilities in 1945.

The airport reverted to solely civilian flying almost immediately after the war, but the airfield remained in Admiralty possession until sold to the Isle of Man Government for ?200,000 in 1948, far short of the ?1 million that the UK Government had spent on constructing the airport buildings and runways, plus the ?105,000 that was paid by the Admiralty in 1943 to purchase the site.

The Manx Military and Aviation Museum is situated next to the airport and has exhibits and information about the history of aviation on the island.