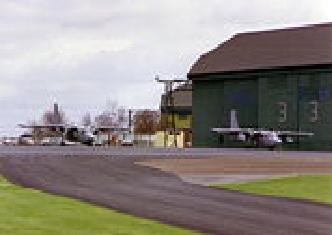 Middle Wallop was also used by the United States Army Air Forces Ninth Air Force as IX Fighter Command Headquarters beginning in November 1943. Along with its headquarters mission, the airfield also hosted the 67th Reconnaissance Group being moved from RAF Membury in December 1943 to be in close proximity to IX FC Headquarters. The 67th Group flew the photographic versions of the Lockheed P-38 Lightning (F-5) and North American P-51 Mustang (F-6) to fly artillery-adjustment, weather-reconnaissance, bomb-damage assessment, photographic-reconnaissance, and visual-reconnaissance missions to obtain photographs that aided the invasion of the Continent.

After D-Day, both the 67th RG moved to its Advanced Landing Ground at Le Molay-Littry (ALG A-9) and IX FC Headquarters moved to Les Obeaux, France in late June 1944 ending the USAAF presence at Middle Wallop. During the American use, the airfield was designated as USAAF Station 449, ID Code: MW.

Middle Wallop returned to Royal Air Force use from July 1944 for No. 418 Squadron RCAF and its de Havilland Mosquito nightfighters.

In January 1945 RAF Middle Wallop was transferred to Royal Navy use and became RNAS Middle Wallop. HMS Flycatcher the HQ for the Fleet Air Arm Mobile Naval Air Base organization moved there from RNAS Ludham, the RAF taking on Ludham again. Five units were assembled there and the last, MONAB X ("HMS Nabhurst"), remained there until disbanded in 1946 following the end of the war in the Pacific.

In 1946 the Royal Air Force occupied Middle Wallop again. No. 164 Squadron RAF with its Spitfires came and were renumbered to No. 63 Squadron RAF. The following year No. 227 Operational Conversion Unit, an Army Air Observation Post training unit, was moved to the airfield. This was renamed as the Air Observation Post School in 1950 and the Light Aircraft School in 1952.

In 1954 a Development Flight (CFS) with helicopters was formed there, this led to the Joint Experimental Helicopter Unit in 1955. On 1 September 1957, when British Army aviation became independent of the RAF, Middle Wallop transferred to the new Army Air Corps. It became the school of Army Aviation, to which it has remained to the present date.