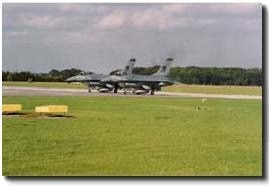 Royal Air Force Kemble was constructed out of the third phase of the RAF’s ‘expansion plan’, which concentrated on training and maintenance bases. Work started in August 1936 when contractors began clearing the site in preparation to receive aircraft the following year for storage.
The first unit to arrive at Kemble was No.5 Maintenance Unit, which formed at Kemble on the 22nd of June 1938 and was to be the unit associated with Kemble for nearly all of its service life, eventually becoming the RAF’s oldest MU. At the end of 1939 there were already well over 600 aircraft on the airfield. A year later No4 Service Ferry Pool arrived from Cardiff to help with the distribution of aircraft from manufacturers to Kemble and then to deliver them on again after modification by 5MU to their respective operational units. Kemble became the Head Quarters for all the RAF Service Ferry Pools, co-ordinating this task with the civilian Air Transport Auxiliary (ATA) by distributing aircraft all over the country.

During 1942 the main runway was constructed and late in 1943 it was extended to its present length and the short cross-field runway was added.

At the end of 1944 several Troop Carrier Groups from the USAAF 9th Air Force used Kemble extensively with masses of Dakota aircraft for vital re-supply missions to the allied troops in the recently liberated parts of Europe.

Kemble’s role completely reversed after the war, aircraft were now being received back from the disbanding squadrons and were either held in storage pending sale or scrapped on site.

The 1950’s arrived and Kemble was now receiving the new jet-engined aircraft and preparing them for issue to squadrons. The first to appear in any quantity were North American Sabre’s that arrived on the airfield in batches of 30 direct from Canadair, all were prepared and sent out to the RAF in Germany. From 1954 the new Hawker Hunters began to arrive and were to be the mainstay of Kembles’ work right through to the 1980’s and Kemble gained the unofficial name of the "Hunter MU".

The scarlet Gnats of the Red Arrows came along with the Central Flying School (CFS) during the 60’s and operated from ‘G’ site for 16 years. Kemble is often referred to as the home of the Red Arrows; they were very popular residents and are still sorely missed by the local community. It was always a treat to see them practicing 3 or sometimes 4 times a day, and the lay-by alongside the A429 at the end of the Runway was always packed with passers by enthralled by their aerial activities. Regular Red Arrow reunions are still held at Kemble and the team are always given a big welcome back at the annual airshow.
With the threat of closure, it was a time of change and the RAF handed over the base to the United States Air Force in 1983. They used Kemble mainly for rectification work on A-10 Thunderbolts, that had been suffering corrosion problems. Although the RAF still maintained a task in one Hanger for work to continue on Hunters and Jetstreams. Other exotic aircraft soon followed as the USAFE realised the quality of the workforce they had taken on, and F5 Tigers, F15 Eagles, C130 Hercules and KC135’s all got the Kemble treatment.

After spending a lot of time and money upgrading the station the Americans surprisingly left in the early 1990’s at the end of the Cold War and the airfield was returned to the ministry of defence. It was then the turn of the Army to use Kemble as a Sub-Depot for the storage of large quantities of surplus vehicles returning to the UK with the disbandment of units in Europe.