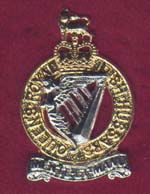 The Queen’s Royal Irish Hussars, normally referred to by the abbreviation QRIH, was a cavalry regiment of the British Army.

The Regimental Journal and Polo Team were nicknamed ’The Crossbelts’. A nickname earned by the 8th Hussars at the Battle of Almenara in 1710. Many customs and practices of the two predecessor regiments were retained such as the green and gold Tent Hat  worn without a badge which was used by officers.