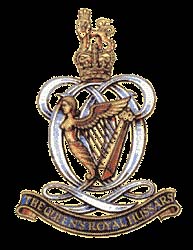 After moving to Catterick in June 1995, the regiment, in January 1996, became the first to be deployed in Challenger 1 tanks to Bosnia with NATO’s British-led Implementation Force IFOR. It spent its time as part of 2nd Canadian Multi National Brigade, and was awarded The Canadian Forces Unit Commendation - the first time that this had been awarded to a foreign unit, and the first overseas commendation received by a British unit since the Korean War. The following year, 1997, the regiment was deployed in the dismounted role to Northern Ireland. The regiment subsequently converted to Challenger 2 tanks, in which an independent tank squadron deployed to Kosovo in 2001, with the entire regiment deploying later that year in the dismounted role.

The regiment is currently based in Sennelager, Germany, where it is the armoured regiment for 20th Armoured Brigade, part of British Forces Germany. The regiment returned at the end of November 2006 from a successful deployment in Iraq on Operation Telic 8.