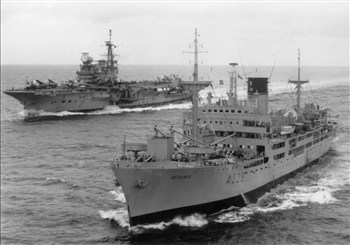 RFA Retainer (A329) was an armament support ship of the Royal Fleet Auxiliary.
R.F.A. Retainer was originally built for the China Navigation Co. as passenger and cargo liner named Chungking . She was purchased in 1952 and converted into a Stores Support ship between autumn 1954 and April 1955 by Palmers Hebburn Co . These facilities were extended in another refit by Palmers between March and August 1957- extra cargo handling gear, lifts and new bridge wings were added. She was sold for breaking up in Spain in 1979.