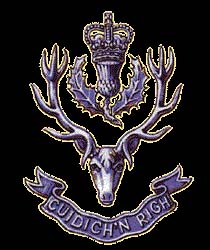 The Regiment wears the MacKenzie Tartan kilt and Cameron Trews, with the reverse for the bandmembers.