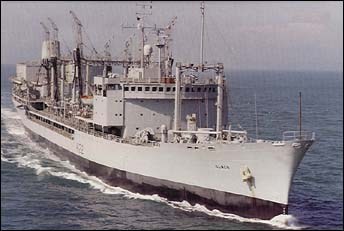 RFA Olwen (A122) was a fast fleet tanker of the Royal Fleet Auxiliary.

In refit during the Falklands Conflict (1982), Olwen only arrived after the surrender. Served in the 1991 Gulf War, supporting a task force led by the carrier Ark Royal which was deployed on exercise in the region. She was also deployed to the Adriatic in the mid 1990’s where she was involved in supporting the NATO task force. Sold to Turkish Shipbreakers and left Portsmouth under tow of the tug Valiant Nader on February 2nd 2001.