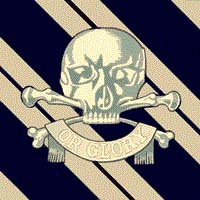 It was formed in 1922 in England by the amalgamation of the 17th Lancers (Duke of Cambridge’s Own) and the 21st Lancers (Empress of India’s). From 1930 to 1939 it was deployed overseas; first in Egypt for two years, and then in India for seven. In 1938 the regiment was mechanised.

I served with a mate Paul Morse, we were guarding Donnegal Pass Police station, he couldnt keep his hands off the woman. He was on guard, rang me in the rest room, stated there were two girl’s outside, to cut the story short, me, him, and two girls found in the bunker, by SSM Eddie Thompson, and Major Hammilton-Russell. It did not go down well, I can say, fined £50 each by the colonel, Major Hammilton-Russell was fuming, ran after us, and said with a red face ,I WILL HAVE YOU, he could of fined us more, for sure, but did not keep a grudge.