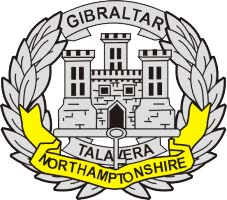 The Regiment was officially formed in 1881 as part of the Childers reforms when the 48th and 58th Regiments of Foot were amalgamated.  However the Regiment can trace its history back a further 140 years prior to this date.

During the Seven Years War (1754-1763) the 48th was deployed to North America as part of Major-General Edward Braddock’s campaign to halt the advance of the French into British claimed territories on the East coast.  The 48th went on to serve in the West Indies and helped to capture the French Island of Martinique and Havana.  In 1773 prior to the American War of Independence (1775–1783), the 48th was stationed in the West Indies and was captured by French forces.  The 48th were finally repatriated back to England in 1780 and located in Northampton.  In 1782 all British Regiments without Royal titles were awarded county titles in order to aid recruitment from that region therefore the 48th became the 48th (Northamptonshire) Regiment of Foot and the 58th became the 58th (Rutlanshire) Regiment of Foot. Both Regiments took part in the Great Siege of Gibraltar when Franco/Spanish forces attempted to capture Gibraltar for 3 years and seven months.

In 1881 the Childers Reforms restructured the British army into a network of multi-battalion Regiments, the 48th and the 58th Regiments of Foot were merged to form the Northamptonshire Regiment.  The newly formed Regiment went on to serve North West Frontier Operations 1897-98, Second Boer War (1899 - 1902) and two World Wars.

In 1960 the Regiment was merged with the Royal Lincolnshire Regiment to become the 2nd Battalion of the Royal Anglian Regiment.

The Regiment raised 13 Battalions and received 58 Battle Honours, 4 Victoria Crosses and lost 5,950 men during the course of the war.

2nd Battalion
04.08.1914 Stationed at Alexandria.
Oct 1914 Returned to England at Hursley Park, Winchester to join the 24th Brigade of the 8th Division.
05.11.1914 Mobilised for war and landed at Havre where the 24th Brigade joined the 23rd Division which engaged in various actions on the Western Front including;
1915
Trench familiarisation as part of the 20th (Light) and 27th Divisions then took control of the front line at Ferme Grande Flamengrie to the Armentieres-Wez Macquart road and at Bois Grenier.
1916
The German Attack on Vimy Ridge, The Battle of Albert.
15.07.1916 Brigade transferred back to the 8th Division;
1917
The German retreat to the Hindenburg Line, The Battle of Pilkem, The Battle of Langemarck.
1918
The Battle of St Quentin, The actions at the Somme crossings, The Battle of Rosieres, The actions of Villers-Bretonneux, The Battle of the Aisne 1918, The Battle of the Scarpe, The Final Advance in Artois.
11.11.1918 Ended the war at Bermissart west of Mons, Belgium.

1/4th Battalion Territorial Force
04.08.1914 Formed at Northampton as part of the East Midlands Brigade of the East Anglian Division and then moved to Bury St. Edmunds.
May 1915 The formation became the 162nd Brigade of the 54th Division and then moved to St. Albans area.
July 1915 Deployed to Lemnos.
15.08.1915 Landed at Suvla Bay and engaged in various actions against the Turkish Army.
Dec 1915 Moved to Egypt to defend the Suez Canal. Then engaged in the Palestine Campaign;
1917
The First Battle of Gaza, The Second Battle of Gaza, The Third Battle of Gaza, The Capture of Gaza, The Battle of Jaffa.
1918
The fight at Ras el'Ain, The operations at Berukin, The Battle of Sharon.
31.10.1918 Ended the war in Beirut, Palestine.

2/4th Battalion Territorial Force
27.11.1914 Formed at Northampton.
1915 Moved to Thetford and then transferred to the 207th Brigade of the 69th Division.
June 1916 Moved to Harrogate and then Stockton.
May 1917 Moved to Carburton Camp, Notts and then on to Clipstone.
14.03.1918 Disbanded and remaining personnel to the 4th (Reserve) Battalion.

8th (Reserve) Battalion
Oct 1914 Formed at Weymouth as part of the Fourth New Army (K4) as a Service Battalion of the 103rd Brigade of the 34th Division.
Jan 1915 Moved to Penzance and became a 2nd Reserve Battalion then moved to Colchester.
Mar 1916 Moved to Sittingbourne as part of the 6th Reserve Brigade.

9th Battalion Territorial Force
01.01.1917 Formed at Cley, Norfolk from the 62nd Provisional Battalion of the 223rd Brigade.
1918 Moved to Sheringham until the end of the war.