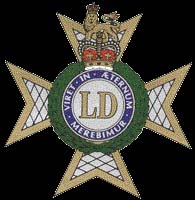 The Light Dragoons (LD) is a cavalry regiment in the British Army.

It was formed in 1992 from the amalgamation of two regiments, becoming the first dragoon regiment in the British Army for over twenty years:

* 13th/18th Royal Hussars (Queen Mary’s Own)
* 15th/19th The King’s Royal Hussars
The Light Dragoons are a Formation reconnaissance regiment with a history in the reconnaissance role which dates back to the early 18th Century. Currently based in Swanton Morley, Norfolk, they are commanded by Lieutenant Colonel Angus Watson MBE.

They are highly experienced operationally with 14 tours of the Balkans during the 1990’s. They have deployed twice to Iraq on Operation TELIC in 2003 and 2005.

In April 2007 the majority of the Regiment including elements of HQ Squadron, B Squadron complete and specialists from D Squadron were deployed for a six month tour in Afghanistan with 12 Mechanised Brigade on Operation HERRICK 6.

The Light Dragoons recruit principally in the North East of England (Northumberland, Tyne and Wear and County Durham) and in South Yorkshire and have strong connections with these areas. For this important reason, the Regiment is known as England’s Northern Cavalry.