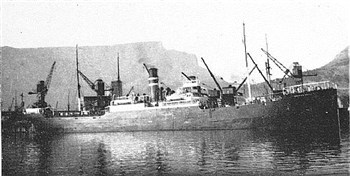 She had cylindrical tanks placed in her holds.Laid down as dry cargo vessel for unknown ownners
1917, completed as Oleaster for the Admiralty but renamed Hollyleaf before entering service with Lane & MacAndrew Ltd under Admiralty control. As were all the "Leaf Group", this was to comply with International law and the US Neutrality Act.
8/9/1919 sold to the British Tanker Company, London
26/11/1920 renamed British Holly. Seen here as British Holly at Cape Town