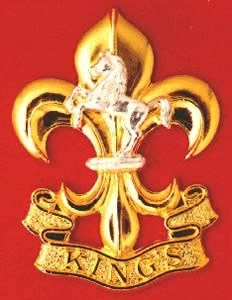 The King’s Regiment, abbreviated as 1 KINGS and often referred to as 1st King’s or King’s, was an infantry regiment of the British Army, part of the King’s Division. It was formed by the amalgamation of the King’s Regiment (Liverpool) and Manchester Regiment on 1 September 1958. In existence for almost 50-years, the King’s served in Kenya, Kuwait, British Guiana (Guyana), West Germany, Northern Ireland, the Falkland Islands, Cyprus, and Iraq. Between 1972 and 1990, 15 Kingsmen died in Northern Ireland during a violent period in the province’s history known as "The Troubles".

When first formed in 1958, the King’s Regiment was configured as an infantry regiment standard to the contemporary British Army. Under a system known colloquially as the "Arms Plot", infantry battalions were assigned various roles for a period of between two and six years and equipped accordingly. Converted first to armoured personnel carriers in the late 1960s, upon amalgamation in 2006 the regiment was classified as armoured infantry equipped primarily with the Warrior infantry fighting vehicle. The regiment’s establishment in 2004 was 620, although its substantive strength was recorded as being 60 below that