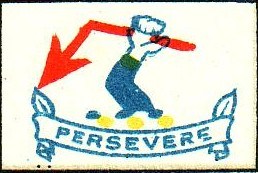 J & C Harrison. The original flag apparently did not have a border which is described by Talbot-Booth (1936) as being royal blue with the motto being also blue. Brown 1958 notes the addition of the border but as Talbot-Booth had shown it in 1936 they were a bit late.
Neale Rosanoski, 15 June 2004