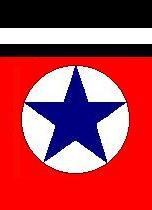 The Vestey family originated from Liverpool, developing a butchery business. They were one of the first businesses to introduce refrigeration into their shops. Previously butchers had to sell off meat at reduced prices on Saturday, the shops being closed on a Sunday. From this developed a business importing meat from South America. Eventually growing to a huge business owning estancias to feed their meat works in Buenos Aires, the "Anglo Frigorifico". This meat works in its heyday could process 5000 head of cattle a day. The saying was that nothing was wasted. The carcasses being exported as chilled beef, together with the offal and hides. Even producing as a by-product insulin for diabetics!
The Blue Star Line was founded by the Vestey family to carry their chilled beef from Argentina and other South

American countries, where they had large cattle ranches and freezer works. The company was formally registered on 28th July 1911 and the first ships were registered with Lloyds Register of Shipping between 1912-1913. Prior to World War I, seven refrigerated ships sailed under the Blue Star Line banner, carrying eggs and other perishables to England from China. By the First World War it had 12 vessels, all their names starting with Brod. A considerable profit was made over these years with the carriage of beef to supply the allied armies in France. It was for these services that William Vestey was honoured with a baronetcy. It was not until 1920 that the familiar "Stars" began to appear the first being the Albion Star.