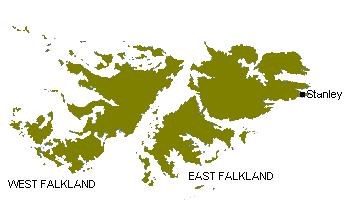 The first European explorer to sight the islands is thought to be Sebald de Weert, a Dutch sailor, in 1600. Although several British and Spanish historians maintain their own explorers discovered the islands earlier, some older maps, particularly Dutch ones, used the name "Sebald Islands", after de Weert.

In January 1690, English sailor John Strong, captain of the Welfare, was heading for Puerto Deseado (in Argentina); but driven off course by contrary winds, he reached the Sebald Islands instead and landed at Bold Cove. He sailed between the two principal islands and called the passage "Falkland Channel" (now Falkland Sound), after Anthony Cary, 5th Viscount Falkland (1659–1694), who as Commissioner of the Admiralty had financed the expedition, later becoming First Lord of the Admiralty. From this body of water the island group later took its collective English name.

Unaware of the French presence, in January 1765 British captain John Byron explored and claimed Saunders Island, at the western end of the group, where he named the harbour of Port Egmont, and sailed near other islands, which he also claimed for King George III. A British settlement was built at Port Egmont in 1766. Also in 1766, Spain acquired the French colony, and after assuming effective control in 1767, placed the islands under a governor subordinate to the Buenos Aires colonial administration. Spain attacked Port Egmont, ending the British presence there in 1770. The expulsion of the British settlement brought the two countries to the brink of war, but a peace treaty allowed the British to return to Port Egmont in 1771 with neither side relinquishing sovereignty.

As a result of economic pressures resulting from the upcoming American War of Independence, the United Kingdom unilaterally chose to withdraw from many of her overseas settlements in 1774.

When Argentina declared its independence from Spain in 1816, it laid claim to the islands according to the uti possidetis principle, since they had been under the administrative jurisdiction of the Viceroyalty of the Rio de la Plata. On 6 November 1820, Colonel David Jewett, raised the flag of the United Provinces of the River Plate (Argentina) at Port Louis. Jewett was an American sailor and privateer in the employment of businessman Patrick Lynch to captain his ship, the frigate Heroina. (Lynch had obtained a corsair licence from the Buenos Aires Supreme Director Jose Rondeau.) Jewett had put into the islands the previous month, following a disastrous 8 month voyage with most of his crew disabled by scurvy and disease. After resting in the islands and repairing his ship he returned to Buenos Aires.

Occupation began in 1828 with the foundation of a settlement and a penal colony. The settlement was destroyed by United States warships in 1831 after the Argentinian governor of the islands Luis Vernet seized U.S. seal hunting ships during a dispute over fishing rights. They left behind escaped prisoners and pirates. In November 1832, Argentina sent another governor who was killed in a mutiny.

In January 1833, British forces returned and informed the Argentine commander that they intended to assert British sovereignty. The existing settlers were allowed to remain, with an Irish member of Vernet’s settlement, William Dickson, appointed as the Islands’ governor. Vernet’s deputy, Matthew Brisbane, returned later that year and was informed that the British had no objections to the<