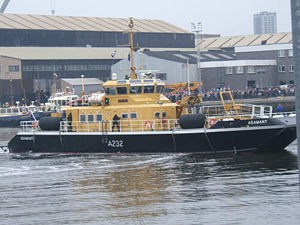 The Royal Maritime Auxiliary Service (RMAS) is a British Government agency which runs a variety of civilian manned support vessels for the Royal Navy.The RMAS merged with the former Port Auxiliary Service in 1976 to form a component of the Naval Service that is known as Marine Services. Marine Services exists to support the Royal Navy. Marine Services was put out to commercial tender by the Ministry of Defence Warship Support Agency (now absorbed into the Defence Equipment & Support organisation) and since 1996 tugs, lifting craft, various tenders and management of HMNB Devonport, Portsmouth and Clyde have been operated by Serco Denholm. Serco are preferred bidders for the next contract. Another component of Marine Services is the Royal Fleet Auxiliary