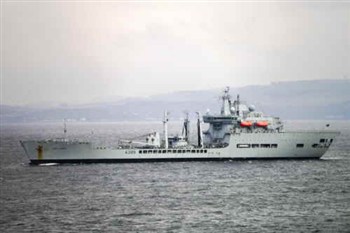 RFA Wave Knight is one of the RFA’s first double hulled tankers, fitted with diesel electric drive and capable of 18 knots. With extensive aviation facilities and a large one-spot flight deck she is capable of supporting the Merlin helicopter for long periods of time.

At the end of October 2005 Wave Knight supported HMS Cumberland in a 200 Million pound drugs bust. They intercepted the speedboat as it raced across the ocean about 100 miles off Nicaragua. The gang of four tried to outrun the helicopter (which is pretty silly as a Lynx can fly at 160 miles an hour) but they were forced to surrender after specialist snipers in the Lynx fired bullets to disable the speedboat’s engines.