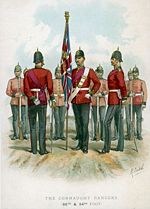 The Regiment was officially formed in 1881 when the 88th and the 94th Regiments of Foot were amalgamated however, its history can be traced back over three hundred years prior to this date.

The 94th was originally formed in 1568 by the James Stuart 1st Earl of Moray the Regent of Scotland for his nephew, the 13 year old King James VI and later James I of England.  Moray sent the ‘Scots Brigade’ to the Netherlands in order to support the Protestant rebellion against Catholic Spain and the Regiment remained there until 1688.   When King Charles II died suddenly in 1685 he was succeeded by his unpopular brother James II who was quickly plunged into suppressing mounting discontent. He ordered the Brigade to be transferred to the English establishment in order to strengthen his failing grip on the British throne but 80% of its officers refused the summons and defected to the invasion force of Prince William of Orange (James II brother-in-law).   Prince William of Orange was invited to take the throne by the English Lords in 1688 and upon his arrival in England James II abdicated. The Regiment remained in Scotland until 1692 and finally became part of the English establishment in 1794 as the ‘94th Regiment of Foot’.  The Regiment went on to serve during the Second Mysore War (1803-1806) and the Third Mahratta War (1817–1818).  The 94th also served during the Peninsular War (1808-1814) fighting at the unsuccessful attempt to relieve the two year siege of Cadiz and then went on to fight at the Battles of Ciudad Rodrigo, Badajoz, Salamanca, Vittoria, Nivelle, Orthes,  and Peninsula.  It was disbanded in 1818 only to be reformed by four former officers five years later and deployed to Gibraltar until 1834.  The 94th was then posted to India three times between 1838 and 1908, as well as fighting during the Zulu War and the First Boer War (1880-81).

The 88th was first raised in 1793 by an Irish nobleman from Connaught as the 88th Regiment of Foot and sailed to the West Indies in 1795, unfortunately only two companies arrived as the rest were lost in a storm.  The Regiment was reformed in 1796 and deployed to India where it served in Bombay, Madras and Ceylon before being deployed to Egypt in 1801 for two years. The 88th was dispatched to South America in 1806 on the disastrous expedition to seize control of Buenos Aires and other Spanish colonies during the Napoleonic Wars (1803–1815).  The city was captured but the inhabitants rose against the small British force and took them prisoner and not returned to England until 1808.  The 88th went on to served during the Peninsular War fighting at the Battles of Talavera, Busaco, Fuentes d'Onor, Ciudad Rodrigo, Badajoz, Salamanca, Vittoria, Nivelle, Orthes, Tolouse and Peninsula.  Following the defeat of Napoleon the Regiment was dispatched to America to curb the expansionist ambitions of the United States, which tried to annex Canada during the War of 1812 (1812-1815).  The War was a 32-month military conflict between the United States and the British Empire, resolving many of the remaining issues of the American War of Independence. The 88th was recalled to Europe following the escape of Napoleon from Elba but arrived too late to participate in the Battle of Waterloo.  From 1847 the Regiment served in the West Indies, Nova Scotia and the Crimean War (1854 - 1856) fighting at the Battles of Alma, Inkermann and Sevastopol.  In 1857 the 88th was deployed to India to serve during the India Mutiny of 1857 and remained there until 1890.

Both Regiments were merged in 1881 as part of the Childers Reforms which restructured the British army infantry into a network of multi-battalion Regiments of two regular and two militia battalions and became the Connaught Rangers.  The newly formed Regiment took part in the Nile Expedition (1884), a British mission to relieve Major-General Charles George Gordon at Khartoum, Sudan from the rebellion led by Mahommed Ahmed.  It went on to serve during the Second Boer War (1899-1902) and two World Wars and also served during the 1916 Easter Rising in Ireland.

During the Irish War of Independence (1919-1922) the Regiment was deployed to India and in 1920, 88 men mutinied at Jullundur in protest at the behaviour of the Royal Irish Constabulary (the ‘Black and Tans’) back in Ireland.  77 of the men were imprisoned and the ringleader Private James Daly was shot, making him the last-ever British Solider or Sailor to be shot for mutiny.  The Irish Free State was established following the Irish War of Independence (1919-1922) and all five British Regiments recruiting from the Irish Free States were disbanded.

The Regiment raised 6 Battalions and received 42 Battle Honours and one Victoria Cross during the course of the war, losing 2,050 men.

1st Battalion
04.08.1914 Stationed at Ferozepore as part of the Ferozepore Brigade of the 3rd (Lahore) Division
28.08.1914 Mobilised for war and embarked for France from Karachi via Egypt arriving at Marseilles 26.09.1914 and engaged in various actions on the Western Front including;
The Battles of La Bassee, the 1st Messines and Armentieres.
05.12.1914 Amalgamated with the 2nd Battalion at Le Touret N.E. of the Bethune;
The Battles of Neuve Chapelle, Aubers Ridge, Festubert and Loos in 1915.
11.12.1915 Embarked for Mesopotamia from Marseilles arriving at Basra.
10.01.1916 Transferred to the 9th Indian brigade of the 3rd Indian Division.
Feb 1916 Returned to the 7th Brigade of the 3rd (Lahore) Division.
03.04.1918 Embarked for Egypt from Kuwait arriving at Suez 15.04.1918 and took part in the Palestine Campaign.
31.10.1918 Ended the war at Nazareth, Palestine.

2nd Battalion
04.08.1914 Stationed at Barrosa Barracks, Aldershot as part of the 5th Brigade of the 2nd Division.
14.08.1914 Mobilised for war and landed at Boulogne and engaged in various actions on the Western Front including;
The Battle of Mons and the subsequent retreat, The Battle of the Marne, The Battle of the Aisne, First Battle of Ypres.
26.11.1914 Transferred to the Ferozepore Brigade of the 3rd (Lahore) Division and amalgamated with the 1st Battalion;
The Battles of Neuve Chapelle, Aubers Ridge, Festubert and Loos in 1915.
11.12.1915 Embarked for Mesopotamia from Marseilles arriving at Basra.
10.01.1916 Transferred to the 9th Indian brigade of the 3rd Indian Division.
Feb 1916 Returned to the 7th Brigade of the 3rd (Lahore) Division.
03.04.1918 Embarked for Egypt from Kuwait arriving at Suez 15.04.1918 and took part in the Palestine Campaign.
31.10.1918 Ended the war at Nazareth, Palestine.

3rd (Reserve) Battalion
04.08.1914 Stationed at Galway and then moved to Crosshaven, Cork Harbour and then to Kinsale.
Nov 1917 Moved to England and stationed at Newcastle.
May 1918 Moved to Dover and absorbed the 4th Battalion.

4th (Extra Reserve) Battalion
04.08.1914 Stationed at Boyle and then moved to Queenstown.
Mar 1915 Moved to Bere Island.
Feb 1916 Moved to Fermoy and then Crosshaven.
Nov 1917 Moved to Scotland and stationed at Nigg, Perthshire.
1918 Moved to Fort George.
May 1918 Moved to Dover and absorbed by the 3rd Battalion.