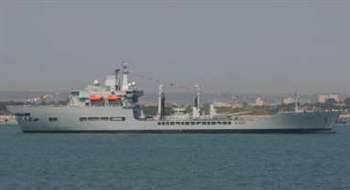 RFA Wave Ruler was built at BAE’s Govan yard and launched in February 2001 and was commissioned in April 2003.

RFA Wave Ruler is one of the RFA’s first double hulled tankers, fitted with diesel electric drive and capable of 18 knots. With extensive aviation facilities and a large one-spot flight deck she is capable of supporting the Merlin helicopter for long periods of time. The crew is made up of 80 Royal Fleet Auxiliary personnel and around 20 Royal Navy personnel.

On Thursday the 14th of September 2006, RFA Wave Ruler swooped on a Caribbean drug smuggling boat - in one of the biggest interdiction operations of all time.

The tanker, supported by a Royal Navy Lynx helicopter, stopped up to five tonnes of cocaine - with an estimated street value of ?500 million - thought to be heading for the streets of Europe and the UK.

The Caribbean drug runners scuppered their small fishing boat and set fire to their illicit cargo North East of the Barbados coast after a night-time chase.

"We’re all delighted. This has been a highly successful operation against those who profit from the illegal drugs trade. The removal of this cocaine from the system will be a serious blow to the traffickers and prevent drugs from reaching the streets where they cause misery and crime.

"The role played by the US Coast Guard cannot be underestimated. They are the ones who face an unknown and possibly armed threat each time they go to board a vessel.

"My ship’s company is very proud that they have prevented drugs worth millions and millions of pounds from reaching the streets. Their performance was exceptional and indicative of the commitment, training and dedication of Royal Fleet Auxiliary personnel operating in support of the UK Armed Forces and our allies. The RFA is proud to play its part in the continuing war on drugs."

The drama unfolded in the early hours of Sunday morning, September 10th.

At around 01.30 local time, the ship’s eagle-eyed bridge team spotted a small, unlit vessel matching the position and behaviour of a suspected drug runner. The ship immediately went into a covert mode, shutting down all her lights to avoid detection.

When RFA Wave Ruler had closed the vessel sufficiently, she broke her covert stance and illuminated the fishing vessel with her signalling projector.

Almost immediately, the fishing vessel’s crew set fire to their boat and within minutes the whole vessel was ablaze.

RFA Wave Ruler’s crew then went into search and rescue mode, snatching all 10 of the fishing boat’s crew, who had climbed into two smaller boats.

Much of the cargo was destroyed but cocaine with a street value of ?65 million was recovered from the sea when it floated to the surface.

"Thanks to the crew of RFA Wave Ruler, this huge consignment of cocaine has been kept off the streets, potentially in the UK. Unstopped, these illegal drug runners might have contributed to the destruction of the lives of more young people and their families.

"The Royal Navy and Royal Fleet Auxiliary are working hard with international authorities in the Caribbean to stop illegal drug trafficking. This is yet another successful bust. My thanks go to RFA Wave Ruler."