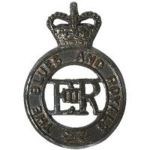 The Blues and Royals (Royal Horse Guards and 1st Dragoons) (RHG/D) is a cavalry regiment of the British Army, part of the Household Cavalry.

Since then, the new regiment has served in Northern Ireland, Germany and Cyprus. During the Falklands War of 1982, the regiment provided the two armoured reconnaissance troops. The regiment also had a squadron on operational duty with the United Nations in Bosnia in 1994/1995.

The Blues and Royals is one of two regiments of the Household Division that can trace its lineage back to the New Model Army, the other being the Coldstream Guards.

The Colonel-in-Chief is Her Majesty The Queen and the Colonel is HRH The Princess Royal. Both HRH Prince William of Wales and HRH Prince Harry of Wales joined the regiment as cornets in 2006.