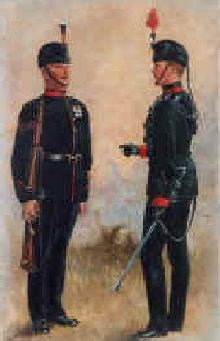 The King’s Royal Rifle Corps was raised in the American colonies in 1756 as the 62nd (Royal American) Regiment to defend the thirteen colonies against infiltration by the French and their native American allies. After Braddock’s defeat in 1755, in March 1756 a special Act of Parliament created 4 battalions of 1,000 men to include foreigners for service in the Americas. Swiss and German forest fighting experts, American colonists and British volunteers from other British regiments were recruited. The battalions were raised on Governors Island, New York. The regiment was renumbered the 60th (Royal American) Regiment in 1757 when the 50th (Shirley’s) and 51st (Pepperrell’s) foot regiments were removed from the British Army roll after their surrender at Fort Oswego.

Among the distinguished foreign officers given commissions in the 60th (Royal Americans) was Henri Bouquet, a Swiss citizen, whose ideas on tactics, training and man-management (including the unofficial introduction of the rifle and ’battle-dress`) were only to become universal in the British Army after another 150 years. With his counterparts, Bouquet, the commanding officer of the 1st battalion, set about creating a unit that was uniquely suited to warfare in the forests and lakes that were the North American theatre of battle between Great Britain and France. The Royal Americans represent a deliberate attempt to produce a different and more able soldier who was encouraged to use his initiative, whilst retaining the discipline that was noticeably lacking in the irregular units of colonial Rangers that were being raised at the same time.

The new regiment fought at Louisbourg in 1758 and Quebec in 1759 in the campaign which finally wrested Canada from France; at Quebec it won from General James Wolfe the motto `Celer et Audax` (Swift and Bold). These were conventional battles on the European model, but the challenge of Pontiac’s Rebellion in 1763 was of a very different character and threatened the British control of North America. The new regiment at first lost several outlying garrisons but finally proved its mastery of forest warfare under Bouquet’s leadership at the decisive victory of Bushy Run.

They were uniformed and equipped in a similar manner to other British regiments with red coats and Grenadier hats , but on campaign swords were replaced with hatchets, and coats and hats would be cut down for ease of movement on the North American frontier.