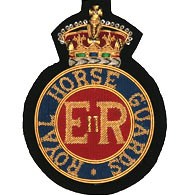 The Regiment can trace its history back to 1650 during the English Civil War (1642-51), when Sir Arthur Haselrig 2nd Baronet of Noseley Hall, at the request of Oliver Cromwell, raised a Regiment of Cuirassiers (mounted cavalry soldiers equipped with heavy armour and firearms) in Newcastle to be dressed in dark blue uniforms.

Following Oliver Cromwell’s death in 1658 and the abdication of his son as Lord Protector in 1659, Charles II was invited to return to England and the monarchy was restored in 1660.  Cromwell’s New Model Army was disbanded with the exception of 2 Regiments; Monck’s Regiment of Foot which later became the Coldstream Guards and the Regiment of Cuirassiers which would become the Royal Horse Guards in 1877.  Following the Restoration the Regiment was appointed a new Colonel; Aubrey de Vere, 20th Earl of Oxford.  He was a staunch Royalist and had been imprisoned in the Tower of London during the course of the English Civil War, the Regiment was renamed as the Earl of Oxford’s Regiment.  This makes them the only Parliamentary cavalry unit still in the British Army, but places them second in precedence to The Life Guards, who were founded as a Royalist unit in 1658.

Charles II died suddenly in 1685 and was succeeded by his unpopular brother James II who was quickly plunged into suppressing mounting discontent. During the Monmouth rebellion of 1685, James Scott the 1st Duke of Monmouth (the oldest illegitimate son of Charles II and the King’s nephew) unsuccessfully attempted to overthrow the unpopular King and the Regiment fought at the Battle of Sedgemoor were James Scott was captured.

In 1688 Prince William of Orange was invited to take the throne by the English Lords and upon his arrival in England James II abdicated.  However James II remained popular in Catholic Ireland which continued to recognize him as their true King.  In 1689 James II landed in Kinsale supported by King Louis XIV and a French Army, in an attempt to reclaim his lost throne.  The Regiment were part of King William’s force which expelled James II and secured the throne for King William III fighting at Battle of the Boyne. As the Regiment’s uniform was blue it became nicknamed ‘the Blues’ and in 1750 the Regiment was renamed as the Royal Horse Guards (Blues).

The Regiment was amalgamated in 1969 with the Royal Dragoons (1st Dragoons) to form the Blues and Royals and are best known for their ceremonial duties but also maintained an active service arm.  In 1991 the Regiment was joined with the Life Guards, as part of the Household Cavalry Mounted Regiment (ceremonial troops) and the Household Cavalry Regiment (operational troops) with both Regiments’ maintaining their separate identities.  Both Prince William and Prince Harry were officers of the Blues and Royals from 2006 until 2008.

The Regiment received 23 Battle Honours and lost 99 men during the course of the war.