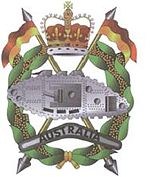 M1A1 Abrams - the Abrams is Australia’s main battle tank (MBT), and equips 1st Armoured Regiment.
ASLAV - the ASLAV is a variant of the LAV II vehicle designed specifically for the Australian Army, and is used in the armoured reconnaissance role with 2nd Cavalry Regiment and 2nd/14th Light Horse Regiment.
Bushmaster – the Bushmaster IMV is an Australian-built wheeled armoured vehicle that is used in the Infantry Mobility role with the 3rd/4th Cavalry Regiment as well as the Cavalry role with the 12th/16th Hunter River Lancers.
Landrover - Re-equiped Land Rover 6x6 LRPV used in the Light Cavalry/Reconnaissance role of the Reserve forces.
M113 - the M113 is an armoured personnel carrier that served in the light armoured and armoured reconnaissance roles primarily with Reserve forces, it is now used in support roles in some Regiments.