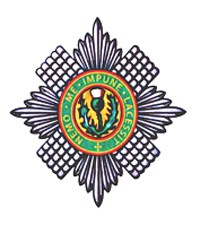 Ireland was in rebellion against Scottish settlers colonizing Ulster and there was no standing army to deal with the situation, therefore King Charles I ordered the raising of 10 Regiments for service in Ireland.  In 1642 Archibald Campbell, the 1st Marques of Argyll was also instructed by The King to raise a Royal Regiment of 1,500 men to act as Royal Guard to the King when he visited Ireland.  This Regiment was named the ‘Marquis of Argyll's Royal Regiment’ and Argyll appointed Sir Duncan Campbell of Auchinbreck as Lieutenant Colonel of the Regiment, which swiftly moved to Ireland.  It remained in Ulster while Civil War raged in England and Scotland until 1649, when King Charles I was executed.  The much depleted Regiment then crossed to Scotland and was referred to as the ‘Irish Companies’.

In 1650 it welcomed King Charles II to Scotland from France who was proclaimed King of Scots.  The King took the ‘Irish Companies’ as his ‘Lyfe Guards of Foot’ and were soon engaged in action at the Battle of Dunbar, were the Scottish Army was defeated by Oliver Cromwell’s New Model Army.  In 1651 King Charles II once again engaged the Parliamentary Forces at the Battle of Worcester and was once again defeated.  The King managed to escape to France but the Regiment was scattered and ceased to exist.

King Charles II was restored to the throne in 1660 after the abdication of Richard Cromwell (son of Oliver Cromwell) as Lord Protector in 1659.  The Regiment was reformed in 1661 as the ‘Scottish Regiment of Foot Guards’ and garrisoned at Edinburgh and Dumbarton Castles.  The Regiment was engaged in Scotland suppressing the Convenanters uprising against the King, who challenged many of the religious reforms imposed on them, finally defeating them at the Bothwell Brig in 1679.  In 1686 the Regiment was brought into the English Army.  In 1688 the Regiment pledged its allegiance to William of Orange who arrived to claim the throne from the deposed King James II who fled to France.  He became King William III and the Regiment was quartered with the other two Foot Guards and became commonly known as the ‘Scots Guards’ to the English Regiments.

From 1704 to 1714 the Regiment was predominately in the Scottish Highlands to keep order until 1709 when The Regiment was posted to Spain and took part in the Battle of Saragossa as part of the Spanish War of Succession (1701–1714).  During this Campaign King William III gave precedence to the Regiment by granting the rank of Lieutenant-Colonel to the Captains and the rank of Captain to the Lieutenants.  The Regiment was also renamed as the ‘3rd Regiment of Foot Guards’ and went on to serve during the War of the Austrian Succession (1740–48), the Seven Years War (1754–1763), The American War of Independence (1775-1782), The French Revolutionary War (1792–1802) and The Napoleonic Wars (1803–1815).
In 1831 the Scottish title was restored to the Regiment which became the Scots Fusilier Guards and went on to serve during The Crimean War, (1854-55) and Canada during the American Civil War (1861 to 1865).  In 1877 Queen Victoria granted the title of Scots Guards to the Regiment.  In 1911 part of the 1st Battalion took part in the famous Siege of Sydney Street, a notorious gunfight in London's East End against a politically motivated gang of burglars and international anarchists.  The Regiment went on to serve during two world wars.

The Regiment gain 30 Battle Honours and 5 Victoria Crosses, losing 2,840 men during the course of the war.