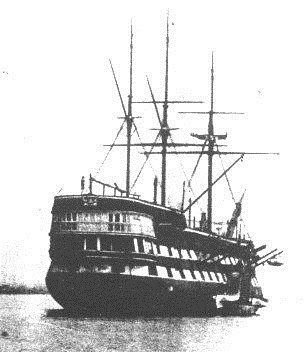 The Training Ship Formidable came in to being in 1869 after several Bristol businessmen petitioned the Admiralty to lease them an ex Naval Vessel for the training of young boys as Seamen. They had been concerned for some time that there were a lot of Street Arabs, or Urchins who were not doing themselves (or society) any good by following the sort of lifestyle which seemed to be their lot if they remained on the streets. Eventually, HMS Formidable was leased to the group of businessmen led by a Mr. Henry Fedden. The vessel was towed around to Portishead in the Bristol Channel, and anchored about four hundred yards off the pier there. When she first arrived there, she was the centre of much local attention, and excursions were organised by the committee in order to raise the money (about ?3.000) that had been needed to convert her for use by the boys, and to tow her to Portishead from Sheerness.

The ship was opened by the Reverend Charles Kingsley, author of "Westward Ho", and the first boys went aboard in December 1969. The school could cater for up to 350 boys at a time. Life aboard was hard, and traditional Naval Discipline was practiced.

The ship lay at anchor for the next thirty years, when a very strong gale damaged some of the timbering, and made further life on board quite risky. Plans for a shore establishment were drawn by a Mr. Edward Gabriel, and the National Nautical School was built on a magnificent sloping site overlooking the Bristol Channel, and about two miles from Portishead Village.

Early in 1906 the first boys moved in to the new school, and in May of that year, it was officially opened by HRH Princess Christian of Schleswig-Holstein. At first the boys slept in hammocks in the four dormitories, then beds were put in there, and the number of boys reduced to 52 per dormitory.

As on the ship, boys between the ages of 10 and 15 were accepted for training. Not all boys trained for sea, nor did all boys go into the Royal Navy. Many boys went into the Merchant Navy.