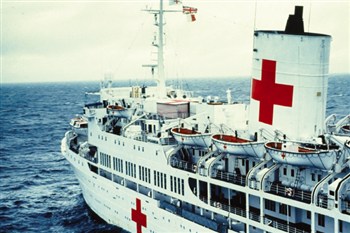 Initially Uganda operated as a liner of the British-India Steam Navigation Company (BI), between London and East Africa, calling at Gibraltar, Naples, Port Said, Aden, Mombasa, Dar-es-Salaam and Tanga, between 1952 and 1967.

Uganda was converted to an educational cruise ship at Howaldtswerke AG at Hamburg. In her new role she sailed her maiden voyage on 27th February 1968 cruising mainly Scandinavia and the Mediterranean.

In 1982 the ship served as a hospital ship in the Falklands War with the affectionate callsign of "Mother Hen". She was called up to military duty while cruising - discharging her bemused passengers of school children.

After a refit in North Shields the ship returned to educational cruising again but only briefly as in January 1983 she returned to duty as a troop ship serving between Ascension Island and the Falkland Islands.

Two years later, she was laid up, rusting, in the River Fal and eventually sold for scrap and, rebadged as the SS Triton, taken on her final voyage to Taiwan where she anchored awaiting breaking.


Search for a name in our archive