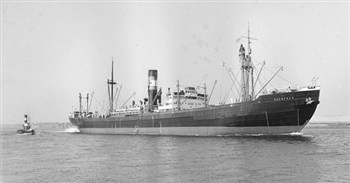 Completed in March 1931 as Uhenfels for DDG Hansa, Bremen. On 13 Oct, 1939, left Lourenco Marques disguised as the Dutch motor merchant Aagtekerk in her third attempt to return to Germany. On 5 November spotted by two aircraft of HMS Ark Royal (91) (Capt A.J. Power, CVO, RN) in Force K about 300 miles west-southwest of Freetown and captured by HMS Hereward (H 93) (LtCdr C.W. Greening, RN). The crew tried to scuttle her ship, but a boarding party from the destroyer prevented the sinking and brought her to Freetown on 6 November. In April 1940 renamed Empire Ability by Ministry of War Transport (MoWT). On 23 Oct, 1940, bombed and damaged by German aircraft in Gare Loch, Scotland.
At 01.19 hours on 27 Jun, 1941, U-69 fired a spread of two torpedoes at two overlapping steamers in convoy SL-78 about 200 miles southeast of the Azores and heard one detonation, but no hit can be confirmed from Allied sources. At 01.49 hours, another torpedo was fired that hit the River Lugar amidships, which broke in two and sank within seconds. In a third attack at 02.37 hours, the Empire Ability was hit by a torpedo, caught fire and sank after 21 minutes.