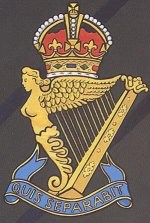 The Regiment was officially formed in 1881 as the Royal Irish Rifles, when the 83rd and 86th Regiments of Foot were amalgamated however its history can be traced back 88 years prior to this date.

Britain and France were rarely ‘not at war’ for 126 years (1689-1815) and in 1793 conflict arose again during the French Revolutionary Wars.  Several additional Regiments were raised to meet the needs of the war; two of these Regiments were the 83rd which was first raised by William Fitch in Dublin as the 83rd (County of Dublin) Regiment of Foot and the 86th (Royal County Down) Regiment of Foot.

The 83rd was soon deployed to the West Indies to gain ownership of valuable French possessed Islands in the region.  The Regiment remained in the region for three years and was ravaged by yellow fever.  The 83rd returned to Ireland in 1798 and raised a second Battalion which went on to serve during the Peninsula War (1808-1814) fighting at Talavera, Busaco, Fuentes d'Onor, Ciudad Rodrigo, Badajos, Salamanca, Vittoria,  Nivelle, Orthes, Toulouse, Peninsula.  The first Battalion sailed to South Africa to secure the Cape of Good Hope from the Dutch, which was an important port on the trade route to India.  British troops forced the surrender of the colony after winning the Battle of Blaauwberg in 1806 and the Regiment remained to garrison the Cape of Good Hope until 1818.

The Regiment was deployed to Canada for 10 years from 1834 where its main duty was to maintain order during the Upper and Lower Canada rebellions of 1837 and fought at the Battle of the Windmill in 1838. The Regiment was also involved in the Indian Rebellion of 1857 and the First Anglo-Boer War (1880-1881).

The 86th Regiment was originally raised by General Cornelius Cuyler in Shropshire as ‘Cuyler’s Shropshire Volunteers’ but had difficulty recruiting sufficient numbers and moved to Leinster, Ireland and recruited as the ‘Irish Giants’.  During the French Revolutionary Wars the 86th initially served as marines at The Battle of Groix, when elements of the British Channel Fleet defeated the French Atlantic Fleet but an opportunity to destroy the whole fleet was missed.  The Regiment was also part of the 1801 Egypt Campaign which drove Napoleon’s Army out of Egypt and captured the French Island of Bourbon (now Réunion).  The 86th also served in India during the Indian Rebellion of 1857, fighting at the storming of the Jhansi fortress for which four soldiers of the 86th were awarded the Victoria Cross; Lieutenants Cochrane and Jerome and Privates Byrne and Pearson.

Anyone who knew my father David Gaw from Holywood Nr Ireland who died in the Korean War.