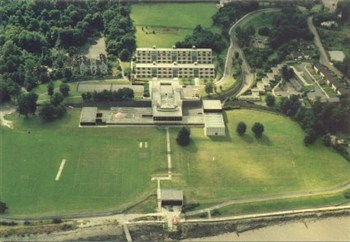 Merchant Navy College was formed in 1968 by the amalgamation of two world-famous training establishments - Incorporated Thames Nautical Training College (better known as H.M.S. WORCESTER) and part of King Edward VII Nautical College. In 1975 the College moved into shore buildings and expanded by the inclusion of Second Mate and Home Trade Certificate courses and by the formation of an Electronics Engineering Department. This included the Marine Radio and Radar Course students and staff previously at South London College (Norwood Technical College). That college had from 1952 conducted courses, very successfully, for the training of radio officers for the Merchant Navy and the linking of these courses with those offered for deck officer cadets provides a unique opportunity for the two disciplines to work side by side.
The college ashore was designed and built (and rebuilt) during the years 1974-75 by the Inner London Education Authority ILEA, opened officially on Thursday 28th October 1976 by Prince Philip, and trained Deck, Engineering and Radio students for the Merchant Navy before closing in 1989.  The Worcester became redundant and was sold to be broken up in Belgium in 1978.