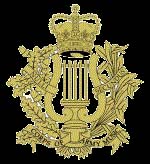 The Corps of Army Music was formed in 1994. It was an umbrella organisation designed to oversee the Military Bands formed during Options For Change. At first there were a total of 29 military bands.  However, in 2006, the numbers were reduced.

Currently, there are 23 bands and the corps employs over 1,000 musicians. They are made up of fully trained soldiers, who may have to be called upon to support the Army Medical Services. The bands produce a wide range of different styles of music including, Big Band, Concert Bands and Marching Bands.