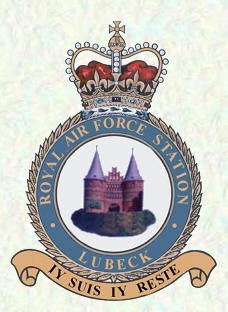 Originally known as B158 and Blankanese

Used as the rear base for operations during the Berlin Airlift.  It is now Lubeck-Blankanese Airport.

Lubeck the old Hanseatic city and cultural centre on the shores of the Baltic Sea was easy to find under the light of the full moon on the Saturday night of 28 March 1942, and the early hours of 29 March (Palm Sunday), because due to the hoar frost there was a clear visibility and the waters of Trave, Elbe-Lubeck Canal, Wakenitz and the Bay of Lubeck were reflecting the moonlight. 234 Wellington and Stirling bombers dropped about 400 tons of bombs including 25,000 incendiary devices. The RAF Bomber Command lost twelve aircraft in the attack.

There were few defences so many crews attacked at 600 metres (2,000 feet). The attack took place in three waves, the first, which arrived over Lubeck at 23:18, consisting of experienced crews in aircraft fitted with Gee electronic navigation systems (Lubeck was beyond the range of Gee but it helped with preliminary navigation). The raid finished at 02:58 on Sunday morning. 191 crews claimed successful attacks.

Blockbuster bombs in the first wave of the raid opened the brick and copper roofs of the buildings and the following incendiaries set them afire. 1,468 (or 7.1%) buildings in Lubeck were destroyed, 2,180 (10.6%) were seriously damaged and 9,103 (44.3%) were lightly damaged; these represented 62 per cent of all buildings in Lubeck. The bombing of Lubeck struck a corridor about 300 metres (330 yards) wide from Lubeck Cathedral to St. Peter’s Church, the town hall and St. Mary’s Church, Lubeck. There was another minor area of damage north of St. Gilles (Aegidienkirche). Also St. Lorenz a residential suburb in the west of the Holstentor was severely damaged. The German police reported 301 dead, 3 persons missing and 783 injured, more than 15,000 (ca.10%) lost their residences.

Arthur "Bomber" Harris, Air Officer Commanding Bomber Command, wrote of the raid that "[Lubeck] went up in flames" because "it was a city of moderate size of some importance as a port, and with some submarine building yards of moderate size not far from it. It was not a vital target, but it seemed to me better to destroy an industrial town of moderate importance than to fail to destroy a large industrial city". He goes on to describe that the loss of 5.5% of the attacking force was no more than to be expected on a clear moon lit night, but if that loss rate was to continue for any length of time RAF Bomber Command would not be able to "operate at the fullest intensity of which it were capable".