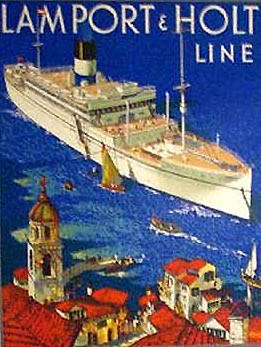 The company started in 1845 with the sailing ship CHRISTABEL to operate in the cotton trade from Alexandria and off Lamport & Holtseason marble trade from Italy. Later voyages were made to other areas including New Orleans, Bombay, Australia and New Zealand. In 1857 the company acquired their first steamship. The Liverpool, Brazil and River Plate Steam Navigation Company was formed in 1865 to operate services to the East coast of South America and in 1877 a Belgian flagged subsidiary company, Societe de Nav. Royale Belge Sud-Americaine was started to operate the Belgian Mail contract to South America. The Argentine Steam Lighter Co., based in Buenos Aires was formed in 1884 to run a fleet of feeder ships in the River Plate. In 1911 controlling interest in the company was sold to Sir Owen Philipps (later Lord Kylsant). The Kylsant shipping empire collapsed in 1930 and the constituent companies, including Lamport & Holt were placed in the hands of receivers. The Argentine Steam Lighter Co. was sold to Albert Dodero, Buenos Aires and in 1934 a new Lamport & Holt Line Ltd was formed and the name Liverpool, Brazil and River Plate Steam Navigation Company passed into history. In 1944 the company was purchased by the Vestey Group of companies which included Blue Star Line, Frederick Leyland & Co., and which also took over the Booth Line in 1946. From 1947 many inter-company transfers of ships and temporary renamings took place, plus the formations of several groupings of companies. In 1991 the last Lamport & Holt ship (CHURCHILL) transferred to Blue Star and became the ARGENTINA STAR, and the name of Lamport & Holt disappeared