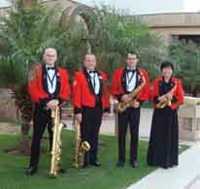 The Band of the Royal Corps of Signals was formed in 1921 from previous members of the Royal Engineers Depot Band. The band was run on a voluntary basis. In 1926 Ranulph Picketts was appointed as Bandmaster and he composed many great military works.

The uniform dates back to 1934. Band members wear red and black jackets, blue overalls and red and silver boots. All instruments are gold apart from silver fanfare trumpets.

It is based in Blandford Forum in Dorset, which has been its permenant home since it moved from Catterick Garrison in the 1970s.